Moms and the Wii

This past weekend was Mother's Day here in Haiti, and as usual, our kids had a great time celebrating it. At least half of the kids here have lost their moms, so maybe that's what makes it such an emotionally charged Sunday morning service as the kids sing with all their might all the official "Mother's Day" songs. Linda and I are always humbled as they pour out their love on us for being their "fill-in" moms, and we both received a picture frame and a plaque as a Mother's Day gift, as well as a very yummy special afternoon meal. It really was a special day together here with our "improvised" family. Sorry I was too busy enjoying it to take any pictures. 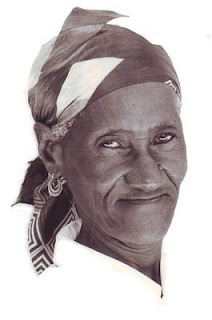 Last week we celebrated the "home-going" of a former House of Hope mom & employee. Mme Merzilien passed away at an age I can't even imagine reaching, she was 105 years old! She worked for almost 30 years here at the HOH taking care of children in need, and one of her daughters followed her in this work and for many years as well. She has numerous grandchildren and great-grandchildren who live in our village, one grandchild is a good friend of ours. She is known for being a joyful, caring lady, and while we know she is much better off now, she will be missed greatly.

Well, I guess it was bound to happen at some time, but in the past couple of weeks something new was introduced here at the HOH. A youth group from a church in Alberta, Canada decided they wanted to raise money to purchase a Wii for the HOH. 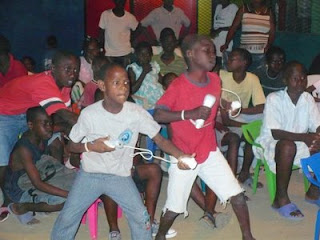 They worked on it for a couple of months, and we just recently received it. So we are now part of the Wii players of the world. I can't tell you how much fun the kids have had with this game. Their two favorites so far are boxing and motorcycle racing, not that they actually get much of a chance to actually have a favorite. With over 100 people vying for a chance to play, and only 2 people playing at a time, it takes quite a while before your chance comes around again! We've only pulled it out twice, because I, as the official "Wii Coach/Referee" only have so much energy...it is quite an exhausting task! But as you can see in the picture of Baslet & Chedlyn, the kids are having a blast with it, and so we say a big thank you to the youths in Canada who thought of getting this gift for us.

If you should pop by the HOH during the evenings these days, you'll probably feel like you've entered into a three-ring circus. While our actual numbers have gone down to around 90 kids, many other kids from our community are preparing for their final exams. Because we have electricity, they come here to study, and it can get quite crazy around here after a while. But if you remember from the last blog, everyone starts writing exams soon, and the government exams will start towards the end of June, so please keep praying for them to work hard, study well, and be examples as they write their exams.

I learned during the last Boys Club we had with the community boys that 6 of them have come to know Jesus as their Savior since the club started! What a joy it was to hear that and watch them stand up to give testimony to that during the last club of the season. We look forward to studying the Peacemaker series with them during the month of August. 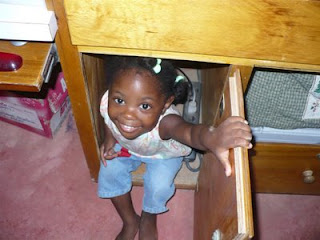 I am studying an online course throughout the month of June. It's called "Foundations and Principles of Holistic Ministry" through the Chalmer Center for Economic Development. So far I've learned a lot, and have been able to keep up with the work load (it only started two days ago), in spite of faces like this popping out of my desk every now and again! It's amazing I get anything done at all!
We continue to have our family devotions in the evenings, and lately have started sharing with each other how the Bible was "alive" for us in any given day. Our hope is to encourage them to read their Bibles on a daily basis, and look for ways it impacts their lives and the lives of those around them. Pray for growth in all of our lives as we seek to become more like Jesus, and then seek to witness Him to those around us.

We continue to appreciate your prayers and support very much, and are so thankful for so many people holding us up before our Father. He is so patient and kind, and He cares for us so completely. Thanks for your part in this ministry.
Posted by House of Hope at 1:16 PM

My mom called and said to share that Mme Merzilien worked at the HOH over 40yr...that she was there before she got there! Oh, my she sure was an old lady! I wonder what was her secret?