My apologies for the long time in between posts.  Lots going on, which isn't a good excuse at all, but it's all I've got!  To be a good Canadian I feel I should start with a bit on the weather.  Here in Manitoba we've had some white stuff falling for the past two weeks, and with wind chills of -17, well, I think it's safe to say winter has arrived.  And truly, I have nothing good to say about that -- except maybe, at least it's not mud.  At the HOH, it's been raining -- hard for the past couple of weeks.  It makes life very difficult, especially for the kids trying to get to/from school.  One of our kids posted this photo this week showing just how hard it can be... 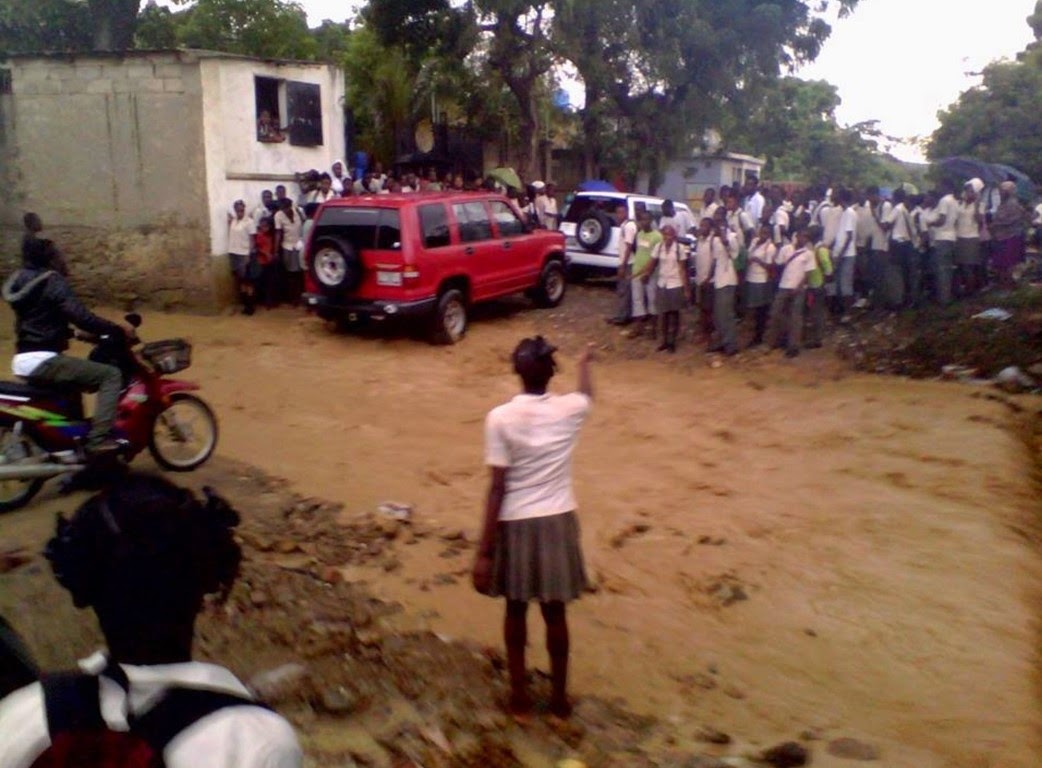 Whether trying to get there, or trying to get home... these students had to wait quite some time for the water levels to go down so they could get across.  This really isn't a river, it's our main road.  The only way they can walk to get to school.  I think I'd be tempted to just stay home -- call it a "snow day", or in this case a "mud day".  But kudos for them for trying to get there!

For the most part, things are going well at the HOH.  The kids are working hard at school, as is Linda.  They had their mid-term exams over the past couple of weeks, and are now busy preparing for the end of term exams coming up in a couple of weeks.  So far we have gotten results back from some of the younger kids.  Several of them are having a tough time, nothing new for them, but tough nonetheless.  We were impressed to see that they passed the mid-terms, which we were not really counting on!  Please keep Ivinsky, Siliana, Chedlyn and John Wisly in your prayers as they struggle to learn in an education system that leaves no room or help for kids with learning disabilities.

We've had some changes in the Young Leadership program.  We are so thankful for the young men who have stepped forward to help Linda and learn to be leaders at the HOH.  Over the summer one of them told us he no longer wanted to be in that position.  Saingermain stepped down as a leader in August.  Since we always wanted it to be something they did because they wanted to, we had no problem with that.  A couple of months after that he decided to leave the HOH altogether and move back with his extended family in Port-de-Paix.  This was a bit harder to take, as he has not finished his schooling, but he is an adult and we respected his decision to do this.

You can imagine the closer the day came for him to go, the harder it was on everyone.  He has been at the HOH for 14 years!  That's a long time, and he was such an vibrant part of life at the HOH. The good thing is that he is not far away, and has promised to come back and help with some of the projects and events he has helped with over the years.  Please keep him in your prayers as he steps out and heads down a new road in life.
At the HOH some good has already come from his leaving.  His absence left holes needing to be filled of things he's been responsible for.  Amazingly, new kids stepped in and are now doing the things he used to do. They never saw the need to do it before because he was doing them.  Now, at seeing the need they have stepped up -- that is beautiful to see.

Taking his place in helping me get pictures from the HOH and keeping up with the everyday activities is a young man named Junior.  He is in middle of the back row of this picture.  This is Linda with the three young leaders helping her out... 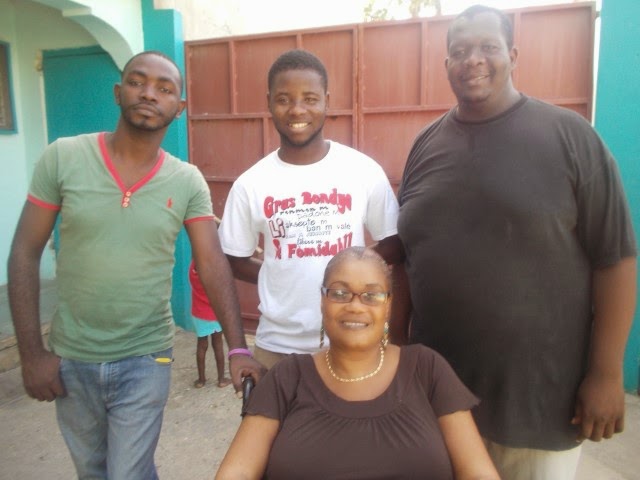 Junior came to the HOH after losing his home and his mom in the earthquake in 2010.  He has grown a lot over the past 4.5 years with us, and we are so thankful for his willingness to step up and help out.  Pray for him as he takes on more roles, and for the whole team as they seek to work together to share the hope of Jesus with the children and youth in our care.

Wanted to give you a small update on our little baby Mits.  He is doing great.  He has so many moms and dads, he could hardly not be doing well! 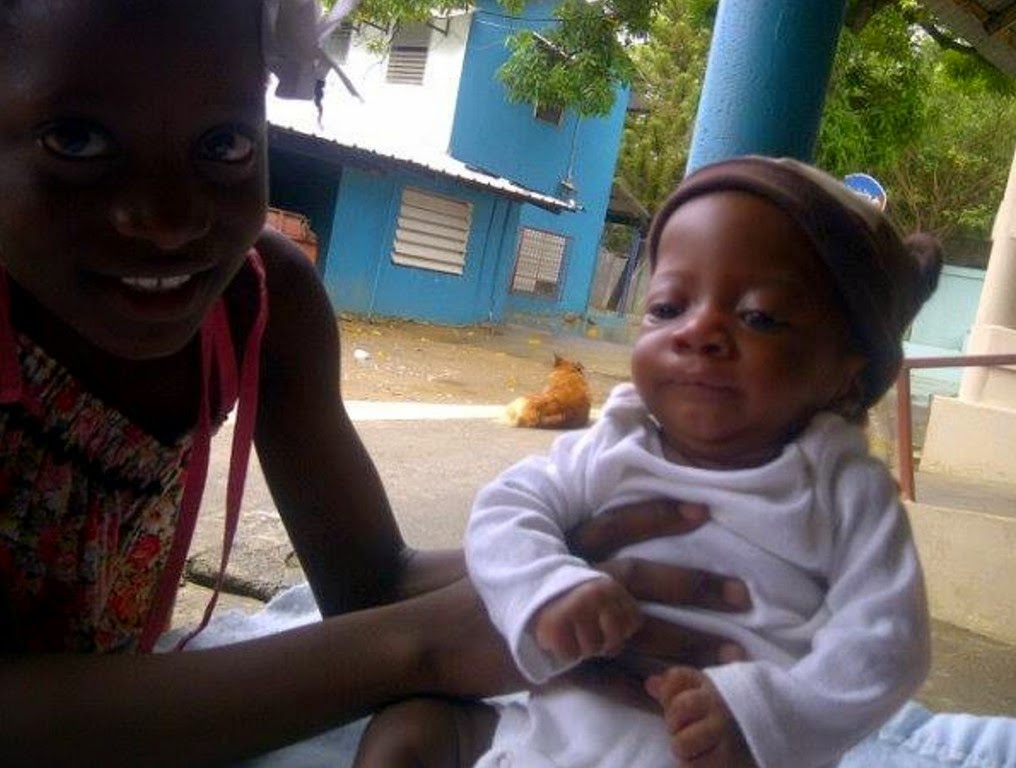 His #1 mom though is 9 year old Dieula.  She's an old-experienced hand at being a mom since she's been doing it since she was about 2!  She has had so many "children" at the HOH we couldn't even count them anymore.  By the time the children turn 2 she's ready for another one; but never forgets which ones are hers -- even the ones who have returned to their homes.  Her loving on Mits has not been without positive outcomes on his behalf.  Just look at how much he's grown. 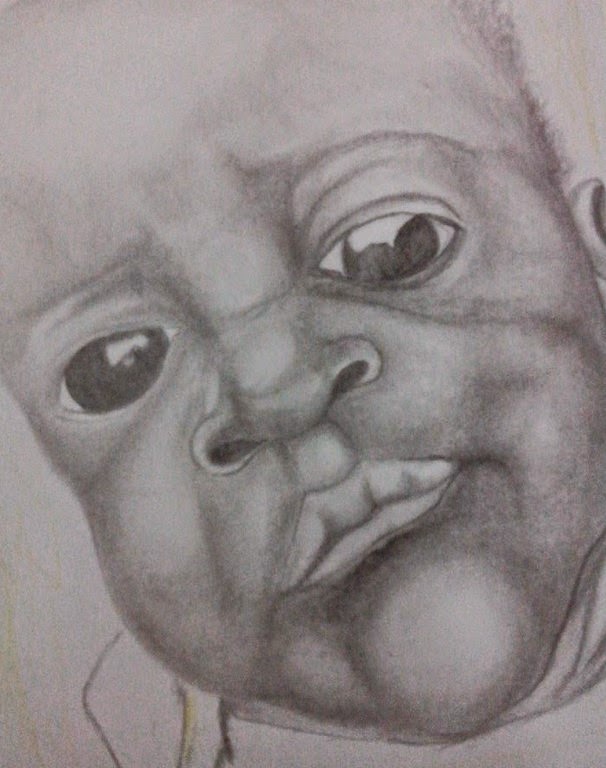 This is a drawing of him done by Ruben Jean, our student who is in his final year of a fine arts university program.  You can certainly see how Mits has put on weight and is doing really well.


We are so grateful to each of you who helps us in one way or another to bring hope to those brought to our home.  We'd ask you to continue to pray for us as we are facing a financial crisis that we would really like to get taken care of.  We've written about it in various places, and have asked people to consider helping us out with this need.  Pray with us for this need.  We know God will provide through whatever means He desires.  Pray that our faith would be strengthened as we trust in Him to act on our behalf at this time.

One last thing I'd like you to keep in mind and pray for.  I will be having a table at a local craft show this coming Saturday here in Portage la Prairie at the Westpark School Gym.  It's from 9 - 2.  Some friends from the Sommerfeld Hutterite Colony are donating crafts, and I am making up packets of Christmas cards and other greeting cards out of drawings our kids have done.   We are doing this as a way to make some money for the HOH and the financial needs there.  It's the first time I have personally done this, I know others of our supporters have raised support for us in this way.  If you are in the area, please stop by and pick up some Christmas gifts from us!
Posted by House of Hope at 3:01 PM